The Nikon 360 camera review will tell you all that you need to know about the KeyMission 360 camera from Nikon.

Our Review of the Nikon 360 Camera 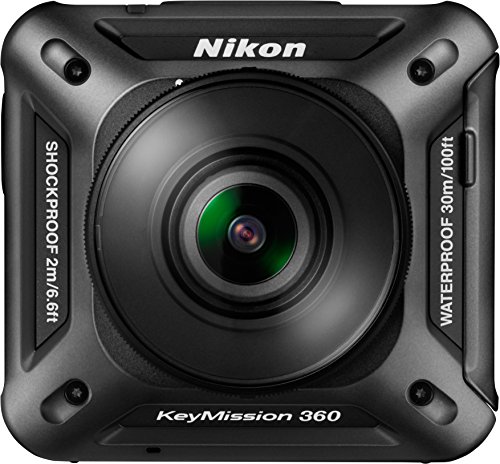 In a nutshell, the Nikon 360 stands out from the crowd due to its ease of use. In fact, it is the easiest 360 camera for hobbyists and enthusiasts. The video quality is pretty decent. However, the technology can still benefit from improvements which Nikon will hopefully implement.

The Nikon 360 has a lot of good stuff going for it, to be sure. But there are a few caveats to be wary of, though.

In terms of user-friendliness, the Nikon 360 rocks. How many 360 cameras do you know of how you can directly upload 360 videos online without a fuss? Imagine being able to get around the tedious conversion process, which takes ages, even on the best devices. You can do that with the Nikon 360.

Another exceptional feature is that the sturdy camera is waterproof, up to a hundred feet of water.

Things are looking great so far. But now the bad news.

It could have been more versatile had it not been for some key missing features. No 16:9 video/image capture mode will always be useful for all of us. Likewise, no mic is available, nor is there a port for inserting one.

Although the video quality is exceptional, the price is nevertheless on the high side. The Nikon 360 costs far more than the Samsung Gear 360. Given its specs, the Nikon cam is quite expensive.

The Nikon 360 is the camera to buy if you want a user-friendly camera with no onerous conversion process to put up with. However, you should also bear in mind the aforementioned caveats.

The Nikon KeyMission 360 is highly resistant to water and can survive a 6 feet fall. At 7 ounces, it is slightly heavier than its rivals.

There is a thread underneath for connecting with a tripod stand.

There is a dome cover on each lens. The camera works best above ground. However, it does have underwater recording capabilities, thanks to the underwater lens covers. Do note that these underwater covers can obscure part of the camera vision to notice some dark areas in the video.

A rechargeable removable battery powers the 360 camera. The device can last up to 50 minutes on a full battery. There is also a sealed door on the camera that has a dual locking mechanism. It covers the micro USB ports, micro HDMI, and microSD card slot.

The video record button is right on top. It also works for powering the device on or off. To power on or off, just hold it for a few seconds. Long press, in other words. But to ensure that your hand does not obstruct the view, you will have to use the app for remote control or deploy the timer.

The app is different compared to the one available for DSLRs. The Snapbridge app works for both iOS and Android. You can install the app on your phone and then connect wirelessly via Bluetooth. The process is pain-free and simple.

Ensure that you toggle on the Wi-Fi option in the KM 360 to control it remotely and transfer files via Bluetooth. With Android, the change is quick and simple. But with iOS, you will have to make this change manually by opening Settings and choosing the network.

The app provides for a good user experience and lends you full control over the Nikon KeyMission camera.

So the Nikon app is more versatile than the Samsung Gear app, which just works for Samsung devices. A small LCD screen is present on the camera so that you can change certain basic settings using the buttons on the camera itself.

For both Windows and Mac ecosystems, the app allows for some basic editing that is easy for novices to master. You can do all the basic simple stuff like applying filters, trimming clips, shortening videos, and uploading to social media with ease using the intuitive interface.

The pre-stitched video feature is a big reason why using the editing software is so easy. You are always free to use other software for more advanced editing. Power users may want to resort to iMovie, Final Cut Pro, and the like for slick editing features not available in the app.

Pre-stitched 360 still images mean that they are good to go. No need to fuss over the stitching process, which you might be aware is painstaking. Thus, you can quickly upload your stills with ease on social media.

Since the camera has small sensors, there will be associated faults in the final image quality. Otherwise, the still photos are very good overall.

Video quality is likewise quite decent. Just make sure that you keep objects at some distance to avoid distortion.

Overall, the Nikon 360 KeyMission 360 sports nice features. However, you will need the budget to buy one.

If you can afford to spend extra, then the pre-stitched capability of the KeyMission 360 may be worth it.

View all posts by Nico →