The LG 360 Camera review will list all pros and cons, features, and functions so that you can make an informed choice. 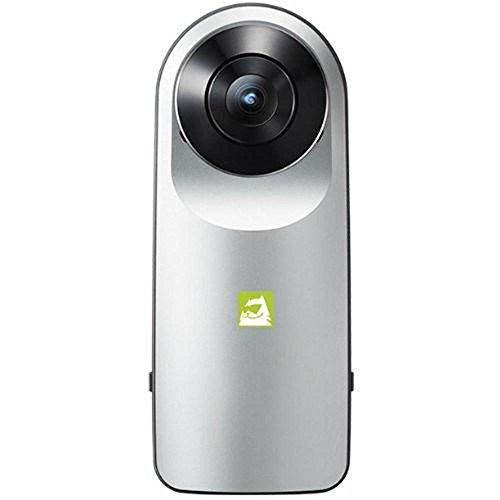 The LG 360 CAM is meant to shoot VR videos that can be viewed on the same brand’s VR headset.

The good news is that you don’t need an LG phone to work this 360 camera. If you wish to, just use it on the iPhone. Or you can even use it by itself since it is a fully functional standalone device. However, the latter methods have some caveats that will be explained in due course.

The LG 360 CAM bears certain similarities with the Ricoh Theta S. The 360 camera has dual lenses on opposite sides of the device. These are fisheye lenses that can together capture the full 360 fields of view.

LG does not disclose much about what’s within. What you do know is that it has a 360 degree 13-megapixel camera.

The 13 MP resolution is much like the Theta S resolution.

The 360 camera can shoot 2,560 x 1,280 resolution images at 30 frames per second. This appears to be somewhat better than the Ricoh Theta S.

The LG 360 CAM also avoids another limitation of the Theta S – reliance on fixed memory. The embedded microSD slot in the LG can support an SD card up to 1 TB.

The trouble is that there is no display to view the video or image being shot since there are lenses on both sides. In addition, the LG has fewer buttons than the Theta S. With just a record button and a power button, the LG 360 CAM is pretty much barebones. You can use the hard casing to protect the camera and increase its shock resistance.

Since there are few buttons on the device body itself, you will have to use the smartphone app to access all functions and exert full control over the 360 camera. Thus, having a smartphone is necessary though it need not be LG.

As usual, Wi-Fi connectivity established the link between the smartphone and the 360 camera. Unfortunately, there is no physical button for activating the Wi-Fi. Instead, Bluetooth is always activated in the camera to pair it any time you like with your smartphone.

After pairing the 2 via Wi-Fi, you can use the app to control the camera. There is a built-in system that deactivates Wi-Fi in your smartphone when it is not in use. Thus, you can save your battery life—Wi-Fi times out after 2 minutes of sitting idle.

While there are hardly any buttons on the device, there are plenty of functions in the user-friendly app to exercise a high level of control. For instance, you can assign one of the 2 lenses as the front camera. Likewise, you can deploy both lenses (for 360 videos and images) or just one lens for 180 imagery.

While in the single-lens mode, you can narrow down the viewing angle so that you can take conventional-looking photos. This makes the 360 camera versatile.

The Theta S has a desktop app that you need to download from the Ricoh website. However, the LG 360 CAM app is designed for the smartphone only. Just bear one thing in mind, though. When you upload photos and videos on Facebook via the app, these will not be considered spherical, which is a drawback for sharing enthusiasts.

You will need to have these apps on your phone for compatibility with Google Street View and YouTube. Once you have used the smartphone app to transfer the video to your phone, you can now rely on Google and YouTube apps to upload online from your phone media gallery.

You can also view your 360 videos and photos simply by tilting your phone in the required direction so that your phone changes perspective accordingly.

After uploading the video on YouTube, you will notice that the quality is slightly better as compared with the Theta S. the Theta S can manage just 1,080 while the LG can go up to 1440. This is a noticeable difference that you cannot miss. But, of course, it won’t be as sharp as full HD.

The LG 360 CAM has 4 microphones to capture sound besides video.

The battery has a 1200 mAh capacity, and it can last around 70 minutes on a full charge. Moreover, the device can work equally well with either Bluetooth or Wi-Fi.

At 72 grams, the camera is very light.

The camera has a protective cap and USB Type-C cable in the box. You can also use the cap as a camera holder. The bottom of the camera has a tripod mount that is pretty much standard.

The LG 360 CAM gives you a simple way of creating 360 VR videos and photos on the go. This device works well for posting 360 videos on YouTube.