How do 360 cameras work? 360 cameras have this wonderful ability to be able to record the world around you. How they manage to do this might seem mysterious.

You might have this question in mind if you are thinking about buying one. After reading this simple guide, you will soon know how 360 cameras work to give you fully panoramic videos and photos.

In simple terms, 360 cameras use a system of 2 or more lenses to capture the whole environment. 2 lenses are the norm. Usually, there are 2 lenses on opposite sides of the camera, with each lens having a field of view over 180 degrees. Thus, ultra-wide-angle lenses are used that are able to capture image details in front of them. These lenses can also record image details behind them to some extent. Specialized software then works its magic to combine or ‘stitch’ together images from all lenses. The final result is a seamless 360 video.

360 videos have existed for quite a while now. But until recently, equipment for shooting 360 videos was very expensive and sophisticated. Therefore, only industry professionals with specialized knowledge of 360 videography were able to use them. Due to the cost and technicalities involved, 360 videography was not accessible to the average person. Therefore, 360 videos were not too common back then.

But now, 360 videos and still photos are supported on social media. For example, YouTube has plenty of 360 videos, while Facebook allows you to upload 360 photos.

How did this revolution come about? In 2015, the trailblazing Japanese brand Ricoh launched the pioneering Theta M15. This pioneering 360 camera proved to be a game-changer. Thanks to the success of this model, other brands also made forays in the 360 camera market, and rivals launched several models.

These cameras were user-friendly and relatively inexpensive – at least compared to older 360 videography equipment.

Mainstream 360 cameras with good user feedback include the Ricoh Theta Z1, Insta360 One R, and the GoPro Max. 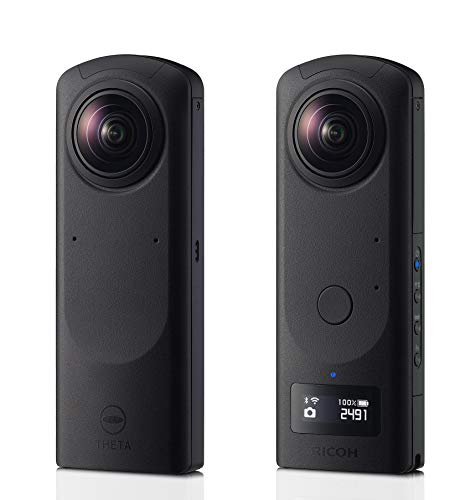 The rise of 360 cameras coincided with the advent of virtual reality – VR. This was no coincidence. 360 cameras are strongly linked with VR. In fact, the best way of enjoying 360 videos is by seeing them on a VR headset. The result is a fully immersive and exceptional viewing experience.

360 videos are recordings of real-life imagery, whereas VR is computer animation. So both are vastly different, although they can be seen with a VR headset.

So in a VR experience, you can wander around a simulated environment that is created via computer animation. But you cannot roam about wherever you like when viewing a 360 video. At all times, you stay in the same position as the 360 camera used to shoot the video or photo.  Another key difference is that VR possesses depth while 360 visuals are 2-dimensional. However, 360 cameras with 3D capabilities are now available, although they are less common than conventional 360 cameras.

Two lenses are located on opposite faces of the 360 camera. There are a few models that deploy more than two lenses. However, they use the same working principle as the two-lens setup. For the sake of simplicity, you should focus on how these lenses combine to create a full panoramic video or photo.

The lenses used are ultra-wide angle or fisheye lenses. They are so-called because of their massive range of view, which is around 200 degrees. Since their range is beyond 180 degrees and recording all that is on their side, these lenses can also record part of the environment behind them.

As the range of view is in excess of 180 degrees, there will be overlap when imagery from the two lenses is combined through software. Hence, software should be capable of removing overlapping parts and combine or ‘stitch’ the two images seamlessly. Ideally, there should be no seam in the final 360 videos. However, many 360 cameras show the seam to some extent.

Certain high-end 360 cameras do stitching on the fly as the video is being shot. Others do it via software after the video is recorded. As a result, stitching can take a substantial amount of time to complete for models that lack on-camera stitching function.

Sensors are a key part of the camera since they let in light and capture image details. For the consumer market, keeping cameras compact and light is essential. Thus, many have relatively small sensors.

However, small sensors have drawbacks. Due to their restricted size, they cannot achieve the same level of color saturation and dynamic range as DSLR or flagship phone cameras. Technology is evolving for sensors and will soon reach a point where sensors are able to record highly vibrant visuals.

Many 360 cameras provide users with a high level of control similar to the DSLR. Thus, you can modify and adjust ISO, shutter speed, exposure, and aperture for the best-looking shots. In some cameras, HDR and RAW shooting are available.

Most 360 videos have apps that allow you to convert spherical 360 videos to ‘normal’ videos. That is, you can convert omnidirectional videos to the conventional 16:9 and other formats.