The Moto 360 Camera certainly offers great convenience in the shape of real-time stitching. The 360 camera addon is a wonderful bargain for its price point and offers nice value for money.

Our Review of the Moto 360 Camera 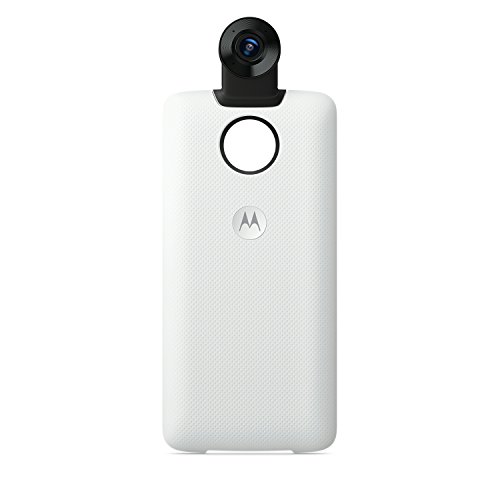 To use this camera, you will need a smartphone that has Moto Mod support. And of course, you must be certain that you want a 360 cam.

Compared to the Samsung Gear, the Moto 360 has an advantage in the form of real-time stitching. This saves you a lot of hassle and work. You just have to record the video, and it is good to go. No manual painstaking stitching on your part.

But there are few caveats to consider as well. The first is that you need Moto Mod support, as explained above. The second issue is that the form factor makes it more suitable for selfies. However, that being said, the Moto 360 is versatile, boasts the unmatched pre-stitch function, and is much cheaper.

You can install the camera easily on a Motorola phone using the Moto Mod support. The support has a cutout so that the internal camera view is not blocked. The camera sits on top of your smartphone, adding just under an inch to its height. So the 360 camera is very compact and easy to handle.

It looks like a periscope peering from atop your phone.

The stitching algorithm works fine for the most part, except that it does not get the camera fully out of the final picture.

You should know that this, not a standalone camera since it is an addon. Hence, it does not have its own memory or battery. It relies on your phone for these resources.

But it does use the same app that your internal camera relies on. So you can switch between the two cams with ease.

You can access EV control, shutter speed, white balance, and other parameters in the professional mode.

You may also use the cover provided to protect the lens from dust when it is not used.

The ability to shoot 4K videos and images is the prime feature of the 360 camera. Besides, it can also capture panoramic images in addition to 360 photos.

The camera addon is also capable of live streaming. This is great for streaming videos live to social media channels pain-free.

As you might already know, 4K resolution is not as slick in 360 as it is in the conventional 16:9 format. With 360, the same resolution is now spread out over the full sphere whereas, in 16:9 form, all these pixels are tightly packed in a small space.

One major issue is that you cannot go above 24 frames per second in the 4K mode. But then, this is an issue with most cameras on the market. While some can go up to 30 fps, none can go up to 60 fps yet.

But at 24 fps, you get a cinematic vibe with the slow frame rate.

Although image quality is not as good as most high-end models, the 360 camera nevertheless offers better quality than other cameras, which cost as much but have lower resolution.

The video format is MP4 at a 50 Mbps bit rate. The good part is that objects close to the camera look fine. Some cameras have problems with close objects.

Distant object, though, appears a bit hazy when compared with rivals like the Nikon KeyMission 360. The latter camera sports larger lenses, which is why it has better picture quality, albeit at a much heftier price tag than the Moto 360.

There is also a small difference in exposure between the dual lenses due to which the seam line feels prominent. A purple fringe is visible towards the extremities of lens coverage areas.

The sound quality is quite solid. So even if you record a clip in the breeze on a rooftop, you will be able to hear your voice clearly without much distortion from the blowing wind. Indoors, there are no issues with sound, so you get crisp audio.

At almost 20 MP, still photos appear sharp. Zooming into these images reveals a high level of detail quite lucidly. However, there is the aforementioned issue of purple fringing. You can see this where the two lens coverage areas join.

Overall, the image quality is decent at this price point.

And in addition to 360 stills, you can also shoot panoramic images. For this purpose, both the rear and front lens. However, the image quality is not the most impressive, considering that the resolution is now limited to only 3.3 MP. The barrel distortion is also highly conspicuous.

With its very low price tag and a wealth of features, the Moto 360 is a good bargain.

The big drawback is that you need have Moto Mod support in place to install the camera. So the camera is available only on certain phone models.

Of course, if you are willing to accept the caveats, as shown above, the Moto 360 is a cost-effective camera.